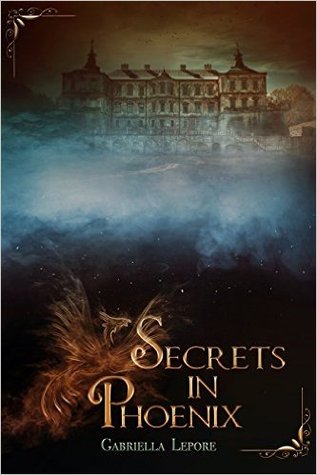 When Sophie Ballester and her twin brothers Sam and Todd are uprooted from their home and sent to a remote boarding school run by their Great Aunt Ness, they stumble upon a hidden room that holds a secret—a secret that will change everything.

The people of Phoenix Holt are not what they seem.

In fact, nothing is.

Secrets in Phoenix by Gabriella Lepore

Secrets in Phoenix is about Sophie Ballester along with her twin brothers Sam and Todd. They grew up in Port Dalton—believing it was home. But then, there was something Wilber, their grandfather, didn’t tell them. That was what leads them to Phoenix Holt. They didn’t know anything about it except that it’s where there Aunt Ness lives. As they discover the secrets within the phoenixes, they started to know each other better. There they discovered a secret room that led them thinking who their Aunt really is. Discovered secrets connect itself from the other, revealing the truth. Will Sophie accept the truth? Or will it lead to rebellion?

I give this book 5 out of 5 stars! This book was amazing—literally amazing. In my opinion, the story has somewhat a Harry Potter touch or theme in it. That kept me interested! Starting off with the actual book’s cover, I love it. The cover was well edited and it gave me feels about the book. As for the description, it’s very catchy which is good for a book.

As for the content, I love Gabriella Lepore’s way of writing. She’s good at delivering scenes and I was never bored reading the book. This book deserves recognition! Anyways, I liked how it started and especially, ended. Unlike the other first books in a series, this book wasn’t a cliffhanger—though it’s the first book of the Phoenix Holt series.
I think if my schedule wasn’t that occupied, I may have finished this book within two days! The book was intriguing and it’ll always keep you wanting for more. I want more, actually. I’m so excited for the book 2 and the thing that I’m really looking forward was the book cover. I love beautiful book covers!

Anyways, I’m totally amazed with or how Gabriella Lepore managed the character development thingy. I mean, it was one of the things most readers look forward to. As a reader, I liked that this book doesn’t have a really fast-changing-character. I mean, in some books, the characters are for example anxious and for one moment, something happened and then after what happened.. there they go! Secrets revealed and it’s as if the wind goes into the opposite direction. Getting back, the characters in this book were not fast changing which I like. It always takes time to change, you know?

As for my favorite characters, well, I like Sam and I ship Sophie and Jaxon. I liked Sam’s humor and the way he handle things, it makes me idolize him! He’s indeed a good brother, well he thought he wasn’t but he was. As for the Sophie-Jaxon, oh man, they’re a perfect match! I liked them both for there emotions are beyond what I expected! That was what I’m always looking for in a book—emotions. Oh, and one more thing, I like Ness though at the same time, I hate her. I like her for being a good Aunt and I hate her for trying to stop the Sophie-Jaxon love thingy. We should totally make an official love team name so that I can spread the word about it!

Over all, the plot was amazing. The twists were unexpected. I like the idea and the concept or theme used. It’s common to the eyes of others but when you get to read the book, you’ll know that it has indeed a common theme but the feels you’ll get were unique. I highly recommend this book!

Hi, Ben! Hope you liked my review. Thank you so much for giving me the chance to be part of #OftomesTeam! I look forward to future deals with you. I love your micro publishing house and I’ll definitely look forward to your future publications. Right now, I’m planning of starting 2016 by reading How I Found You by Gabriella Lepore. Good start it is!

Where to find me:

Gabriella Lepore lives on the coast of Wales in the United Kingdom. She began writing at an early age and grew up with a passion for all things supernatural. She currently has five Young Adult books in print: How I Found You, Evanescent, Phoenix Holt and The Witches of the Glass Castle Books 1 & 2.

Oftomes will be publishing a handful of novels a year. The main aim is to create a family of readers and authors, uniting the world through words.

Make sure you follow us on social medias to stay up to date on news.

You can also subscribe to the newsletter on the homepage.

3 thoughts on “Book Review: Secrets in Phoenix by Gabriella Lepore”